Agnes Varda's "The Gleaners and I" 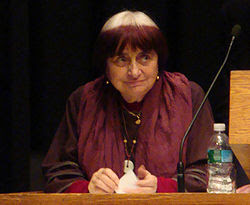 You must see Agnes Varda's documentary film, "The Gleaners and I."  (Available on Netflix.)  Varda begins with the Millet painting of gleaners and goes on to show us "those who bend over"--the term for gleaners.  They gather crops and shellfish after the harvest is over, and in France are protected by law.  The remains of the harvest belong to them.  With a hand-held camera, Varda films people gathering potatoes, grapes, herbs, apples, oysters, whatever is edible, not just from fields, vineyards, and oyster beds, but from the streets.
Gleaners are not just the down and out. There's an acclaimed chef picking herbs, but mostly they are the poor, and those who chose to be poor, like Alain, who has a graduate degree, lives in a shelter, and eats off the streets.  We first see him as he picks through garbage left from the street market.  He eats as he goes, eats with discernment--the discernment of a fussy pedigreed dog.  At first I thought, He must be nuts!   He's not.  He's a bit of a saint.  At night in the shelter, for no pay, he teaches immigrants--mostly Africans--how to speak and write French.  He's a marvelous teacher.
Varda also films trash-pickers.  Like gleaners, they are protected by law.  Since discarded objects are ownerless, a lawyer explains, these things may be taken.  We see an artist who picks through trash at night and brings his finds home on his bicycle.  At night the trash dumps are full of scavengers.
Why should you see this film?  Though it was made in 2000, it is perfect for the present post-gilded age.  Not just that: the film is as good as Orwell's Down and Out in Paris and London.   Varda shows us the humanity of those who might otherwise disgust us.  She doesn't recoil.  She listens to the drunk who scrabbles in the fields for potatoes dumped because they do not meet supermarket requirements: they are too large; some are double, fused into heart shapes.  They stand for all the oddities that fascinate Varda and compel her kind but rigorous eye.
The film seems to have changed the lives of some of its subjects.  Two years after "The Gleaners and I," Varda films her subjects again.  (This short is on the Netflix CD of "The Gleaners and I.") We meet Alain again, this time having coffee with a young woman who had recognized him from the film.  We see the most pathetic of the drunks.  He's sober.  (And we see another alcoholic still drinking--enough to kill her.)
Weeks after seeing the film, I think about its people and Varda's sensitive intelligence.  I would rather be in her world than Martha Stewart's.
Posted by Mim at 6:49 AM