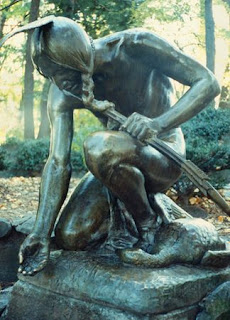 On my daily walk I usually pass this Cyrus Dallin statue. Lately I'm more interested in the familiar strangers I see who are usually out of doors when I am. Today I saw the elderly Muslim couple. She wears a head covering and a long dress. I worry about her. Her coat is not heavy enough for the cold weather, and her shoes are thin-soled sandals. I watched as she held on to her husband's arm and walked down Pleasant Street. Unlike Americans, they stroll, as if they were on the Corniche, gazing at the sea.
When I reached the Starbucks in Arlington Center, I saw the teenage couple with their infant baby. They are so terribly young. Bundled in winter coats--hers pink--they sat at an outdoor table and wheeled the baby back and forth and jiggled the carriage as they sipped their drinks. I've seen them every day this week. The father is fair with large eyes and a Roman nose--a face like the one of Alexander the Great stamped on so many silver coins. Sitting near them was a large man with long brown disheveled hair who sits outside Starbucks every day of the year. He speaks to some of the regulars. Sometimes he seems stunned. We exchange glances but we don't speak.
Tomorrow when I go out I will see other familiar strangers. Maybe some of them, over the weeks and months and years, have gotten used to seeing me.
Posted by Mim at 5:54 PM