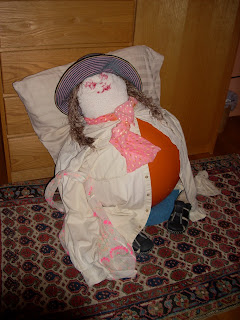 On Friday afternoon, I had two visitors, young girls. A. began playing with my exercise ball and then she and her sister S. began transforming it into a character. First they made a boy with a checkered hat and big feet. S. drew his face on an old towel, which we stuffed into the hat. I helped by searching the house for a shirt, gloves, shoes, the hat, a tie, a scarf. S. named him Chuck. A. did not like the name but did not put up a fight.
We stripped off the clothes and made another character, the one you see here. To turn Chuck into a girl, S. gave her eyelashes, fuller lips, and a beauty mark at the corner of her mouth. Her hair is a fuzzy scarf. We agreed our character liked to eat.
She still had no name. A. and S. argued about the name. A. chose "Jessica"; S. wanted "Tilly." "She's a Tilly," she said. A. did not agree. "Look at her," S. said. "Jessica does not fit her character." We were in the realm of fiction and fairy tale, where the name should fit the character. In real life our names often do not fit us. Our character was fat, untidy, goodnatured. No Jessica or Miranda or Annabel or Marilyn. A. turned her back on the chubby, jowly creature she had helped make, and insisted we call her "Jessica." She liked the name, but it had nothing to do with our fat creature. We compromised. S. said: "We'll call her T.J."
After they left, I took T.J. apart. (She's still "Tilly" to me.) Back in their original places in my closet and dresser drawers, the clothes have no memory of their excursion.
Posted by Mim at 12:56 PM