Tuesday Poem: "The End of War" 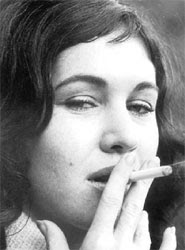 The End of War
by Dahlia Ravikovitch (1936-2005)
He came at midnight, both legs lopped off,
through his old wounds had long since healed.
He came through the third-story window--
I was struck with wonder at how he got in.
We'd lived through an age of calamity;
many had lost their closest kin.
In streets sown with shredded papers
the orphan survivors were skipping about.
I was frozen as crystal when he came.
He thawed me like pliant wax,
altered me even as the pall of night
turns into the feather of dawn,
his bold spirit translucent as mist
that streams from the morning clouds.
(Translated from the Hebrew by Chana Bloch and Chana Kronfield.)
Israeli poet Dahlia Ravikovitch was active in the peace movement. The poem with its unmistakeable historical context is an elegy, a dream poem, a vision. The dead man--I take him to be a mortally wounded soldier--comes back from the grave and the speaker in the poem comes to life. It is mysterious how an elegy can also be a resurrection. If only that were true in life. Yet daily "the pall of night/ turns into the feather of dawn."
Posted by Mim at 5:03 AM