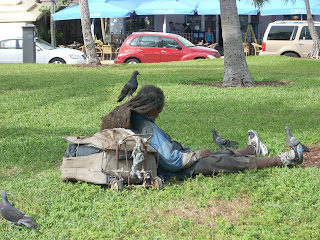 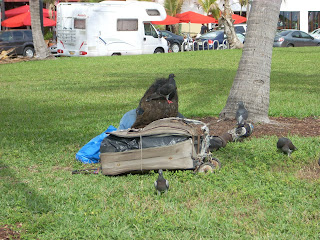 This morning I thought of Wordsworth poem, "The Leech Gatherer," when I saw the man I call the Preacher.
As a huge Stone is sometimes seen to lie
Couched on the bald top of an eminence;
Wonder to all who do the same espy,
By what means it could thither come, and whence;
So that it seems a thing endued with sense:
Like a Sea-beast crawled forth, that on a shelf
Of rock or sand reposeth, there to sun itself;

Such seemed this Man, not all alive nor dead . . .
In past years I've heard him preach in an incomprehensible language as he held a bible. He doesn't preach now. He sits or lies on the grass near the beach on Ocean Drive. His dreadlocks have broken down into a thick mat; he dozes. Even when he's awake he seems to doze. He speaks to no one. How he keeps alive I don't know, though one day I saw him eating.
The pigeons treat him as if he were a rock or a tree. He's their perch.
My mother's brother and sister died in a mental hospital, where they had lived for many years. At least the Preacher is outside. The weather is beautiful this morning.
Posted by Mim at 8:07 AM