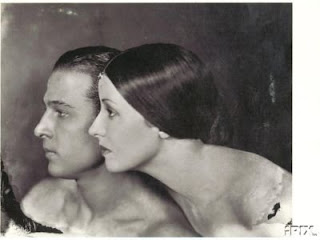 (Rudolph Valentino and Natacha Rambova, born Winifred Shaughnessy)
Last night I watched Rudolph Valentino in Blood and Sand. He plays a toreador, swirls his cape, holds a sword, and poses but does no bull-fighting. Those scenes are spliced in from footage of actual bullfights. After a worrisome day, I thought it might be a good idea to have a stand-in to impersonate me during painful experiences. I could watch from the sidelines. My troubles were not serious, but if they were, would I want someone to experience them? No. The substitute would, in a sense, become a scapegoat, and I would no longer possess my life even to the small degree that I do--that we all do. In the bible, Abraham sacrifices a ram instead of his son. If I were a Christian I' would believe Christ was my stand-in. Suppose we could choose an animal for a stand-in? The thought is repellent. Freud believed that we live out our parents unconscious and unfulfilled desires. I hope this is not always the case.
My thoughts took a playful turn. Some say that every experience has already been played. We just repeat them, act them out, whether we know it or not. Those who do know are understudies waiting in the wings. Susan Sontag wrote that Gertrude Stein's work was comic because in all her writing everything was like everything else; everything had the same value, so there was no tragedy. Nothing is a big deal. I began to laugh at my little troubles.
Rather than wish for a stand-in, I'll have to be clever and avoid certain dangers. In the end I believe people can invent themselves. After all, I'm an American. Rodolfo Alfonso Raffaello Piero Filberto Gugliemi di Valentina d"Antonguolla became "Valentino." Winifred Shaughnessy became Natacha Rambova. No one can play them--at least not yet.
Posted by Mim at 2:10 PM