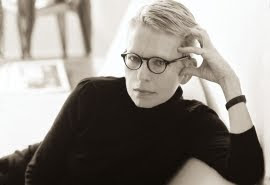 "She passed away," the owner of Eutopia books told me, when I asked about Regina. "She was very ill; she closed the shop, and then she passed away." When I had seen Regina's farewell sign on the Galerie d'Arts Decoratifs, which had been next door to Eutopia on Jefferson Avenue in South Beach, I assumed Regina's business had not survived the economic downturn. It was shocking that she had not survived.
Regina's gallery was a triumph over entropy, the principle by which all things tend toward disorder. There was no disorder in her shop and none in her person. She wore only black or black and white, usually a white blouse with black pants. Her taste was strict, rigorous, elegant. On rare occasions her arrangements felt chilly. Though she was German by birth, having lived in Paris, which she thought of as her true home, she dealt, for some years, in French Art Deco furniture, and then as those pieces became scarcer began to sell mid-century modern. One Christmas, about twelve years ago, shortly after we had bought a condo on Meridian Avenue, I wandered by her shop for the first time and saw her astonishing Christmas window decorated with various, colorful porcelain. Her windows were happenings. Often she would display the work of local artists; Ena Marrero was one. In Regina's window were Ena's fanciful animals and her curtain of marvelous stockings knotted with chunks of gorgeous glass. She also handled the work of architect Richard Meier.
In the shop Regina was all business. I never knew her to miss a day of work, but sometimes I would see her having dinner at Da Leo after she had closed for the day. Done with business, having drunk wine and eaten pasta, she would greet me with a lavish embrace. She would also let herself go with flowers, always dozens of white lilies--no other flower--which she would crowd into a vase. The perfume would seep under the door: intensely fragrant. 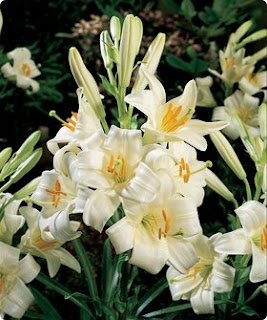 Easter morning, when the altar of the Community Church on Lincoln Road bore the weight of enormous vases of white lilies, I went to Regina's shop again; her sign with its "au revoir" was gone. 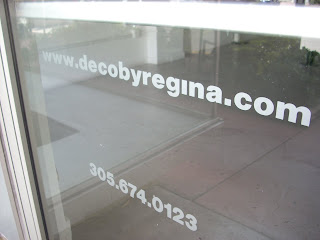 The shop was empty. Regina had her office on the balcony at the top of the spiral staircase. Below her meticulously organized work space, the elegant objects of her collection played with and against each other. I'll miss her and her creations. 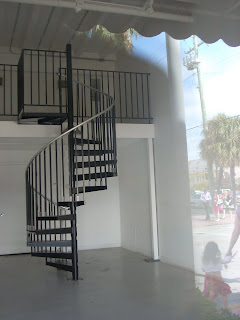