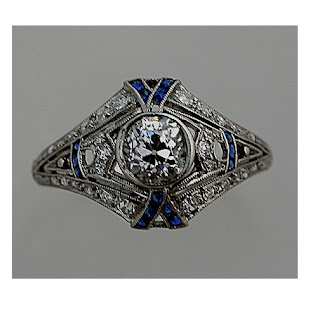 Years ago, when I was  little, my mother lost her engagement ring, which my father had given her in the 1920s.  Though it was much less grand than the ring in the picture above, it was the same style, but with five small diamonds and four tiny dark blue sapphires.  My father, who never made much money, must have saved for quite a while in order to buy the ring.
It was a snowy winter when my mother lost her ring.  We lived on the first floor, right over the apartment house boiler, so we got double heat, from the radiators, which would not shut off, and from the hot floor.
That spring, while she was hanging out clothes to dry, pegging them onto the line that ran from the bedroom window across the courtyard, my mother saw something glittering on the ground below, and rushed down.  There on the ground, under the window where she had been hanging out clothes, was the ring.  It had been there all winter under the icy snow, which had finally melted away.  My mother remembered that she had taken off her ring and put it in her shallow apron pocket to keep it safe as she scrubbed clothes--we didn't yet have a washing machine.  It must haven fallen from the pocket when she leaned out the window to hang out the clothes.  I'm wearing it now.
Posted by Mim at 12:38 PM