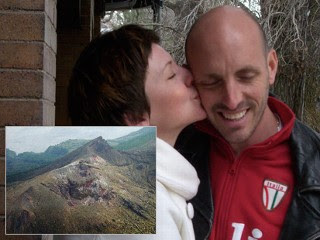 Like many of us I hadn't read Craig Arnold's poems until after the news of his disappearance in April on a remote Japanese island, where he was hiking alone to the Shintake volcano.  It is believed he fell near a steep ravine as he came down the mountain. His body has not yet been found.  (With him in the photo is his partner, Rebecca Lindenberg.)
His voice is alive in his work, especially in the remarkable title poem of his last book, "Made Flesh," which spurs me to write better.  It is a poem of ecstasy, reminiscent of the work of Gerard Manley Hopkins.
Made Flesh
THAT day drew a broken tower
out of the tarot pack     a plume of flame
and over the wreck a vast flower
with ragged petals of soft white ash
that was once flesh and useless paper
blooming over the postcard-perfect blue
Of all the tiny figures falling
end over end     there were two
who had stepped up holding hands
to give themselves together to the air
A love that       sudden and certainly    I knew
I didn't share and didn't want to share
with anyone but you
your sunlit demons
your cigarettes and fire escapes
your petals and grenades      your laugh
like the chime of wind in icicles
the chuckle of fire in ecstasy
of its own burning
and at my fingertips
were ten digits  you had asked me
never to dial again
And then it seemed my whole head
the dot on this little i     would blow
like the puff of a dandelion
And then the seedpods of my eyes
split into tears      and I felt a swift
clutch at my throat      that was the root
of cruelty and tenderness worming its way in
YOU are the hummingbird that comes
a pure vibration    wings a blur
propeller-burring a million beats
to keep still     the world's littlest pivot
spinning the heaven's hemisphere
as a wineglass with a wet finger
laid on the rim to make it ring
Feathers a rainbow    how you reel
hovering over blossom     cheeks
tucked into the honeysuckle
to lap a single drop of nectar
onto your tongue       messenger-goddess
kicking a gold-dust of pollen
out of your winged heel
The slow promise of your approach
makes my throat thick     the joy gathers
deep in my spine       as if it were a snake
making a smooth wave of muscle
toward the taste of water
Posted by Mim at 6:57 AM