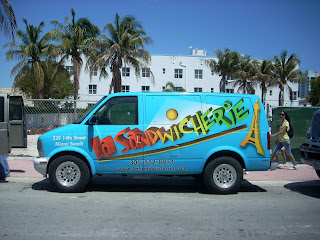 "Reading the Signs" is the name of a blog I follow. While I do not have the power of divination, as I walk around South Beach, which is planted with signs, I think about the various messages I see. The bright blue truck with the image of the Eiffel Tower belongs to "La Sandwicherie" restaurant. The French use the English word "sandwich," but in France is there any such thing as a "sandwicherie"? I doubt it. The menu is a melange. Along with saucisson, pate, croque monsieur, and camembert there are turkey, ham, egg salad, and smoothies; there is also prosciutto and mozzarella, yet the sign signals "French," and French means chic; French means delicious. ("Cherie," as you know, is the French word for "dear.") 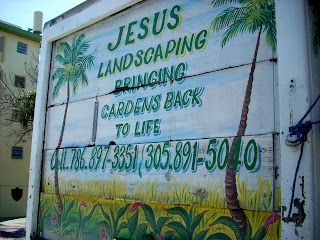 Is this landscaping company named after Jesus? Is the owner named Jesus? Whatever the origin of the name, the message plays on the story of Jesus' raising Lazarus from the dead, on the belief that he will raise all the virtuous from the dead at the Second Coming. I once saw one of the Jesus Landscaping gardeners on his knees, planting flowers, and smoking a big black cigar. (The name of a hand-rolled cigar of the finest tobacco is a "puro.") 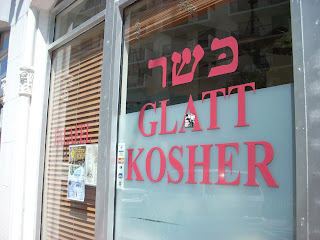 This kosher restaurant is a few blocks from La Sandwicherie and one block from the beach in the former location of Pita Loca. The sign for Pita Loca is still up. Crazy Pita is a chain of middle eastern restaurants. "Glatt Kosher" has come to mean food that conforms to the strictest kosher dietary rules. This week they are closed for Passover. They usually do a brisk business. Their menu includes falafal and other middle eastern dishes. 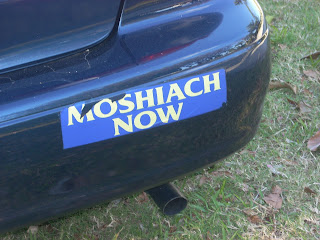 The bumper sticker, a bold graphic announcing the immanence of the Messiah, reminds me of a cheerleader's shout. I hear it as a chant: Moshiach now! Moshiach now! 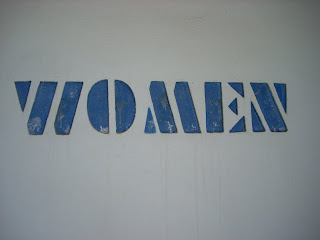 The sign at the toilets at 14th Street and Ocean Drive always surprises me because I come from the generation of women for whom public toilets were labeled "Ladies" and before that "Girls."
In the sixties and seventies, they were still called "Ladies." Men went to men's rooms; women went to ladies. "Women" is a better name for a room in which women defecate and urinate. 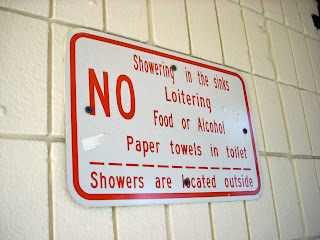 Some people might wonder how it is possible to shower in a sink. I've seen homeless people wash their feet and legs in the sink--one leg at a time, as they balance on the other leg. Should we mind? I don't. 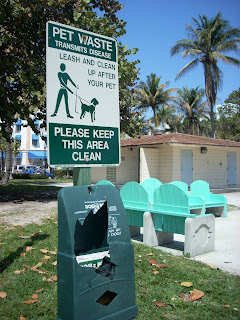 When I saw these pet waste stations in Switzerland I thought they would never go over in the States, but things have changed. The American version is much more threatening, however. 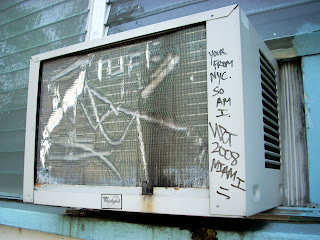 I'm not sure I completely understand this personal message. "Your [sic] from NYC. So am I," followed by initials, the year, and "Miami." What happened when these two New Yorkers met?
Moshiach on a bumper sticker, Jesus on a truck, etc. All send messages that have a more pronounced flavor than such names as "Nextel," "Verizon," or "Energy Star." Which are for me? La Sandwicherie and Women.
Posted by Mim at 7:52 AM