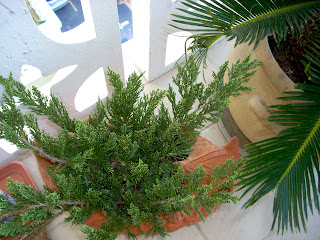 In January, using compost he had brought to Florida from Massachusetts, J. potted up a juniper plant and set it on the balcony. Today, three months later, he moved the pot from the floor to a table. He was clearing the decks to sweep. 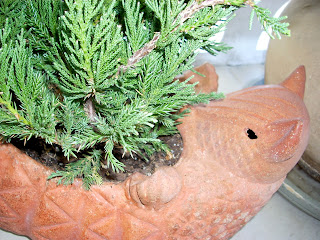 Trailing out from under the armadillo's paw was a green fringe. Not Juniper. At first I thought it was a weed. I lifted the fringe and caught the pungent minty smell of tomato plants. The fringe, composed of at least a dozen and a half tomato shoots, had grown in the compost from a discarded tomato. With a small sharp spoon I pried it up in one clump. The leggy plants had been reaching for more sun.
I wish I had taken a picture of the tangled shoots. Stem, roots, leaves: all tangled. They grew from one small clot to which, on one side, clung a frail papery, pale brown skin. The skin of cherry tomato. Would the stems come apart? Taking care not to break them, I eased the stems away from each other. None wilted. I picked out the largest plants--about five inches long--and planted them up to the hilt. Tomatoes send out roots from the stem. 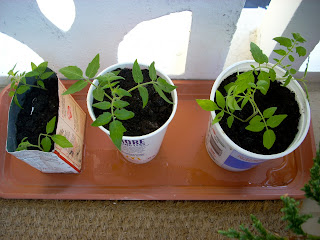 Some I saved in water. 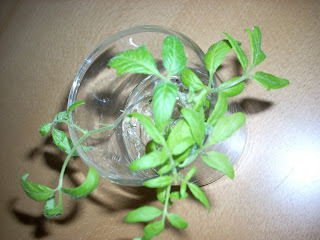 The rest went into the compost container John will take to our allotment in the community garden.
If I had tried to sow tomato seeds, would they have sprouted so luxuriantly? I don't know. But I treasure these volunteers and will try to grow them on. They will come north with me in April in my carry-on bag.
Right now, after having had a stretch of poems, each quickly generating the next, I am waiting for another poem, waiting longer than I'd like. The tomato seedlings have been growing for two and a half months without any help from us, except water. We didn't know we were watering them. Some fragment--word, dream, memory--I've tossed away may sprout into a delicate fringy green with long white roots. Perhaps I should think of myself not as a poet but a rescuer of poems.
Posted by Mim at 1:58 PM