I am Raftery the poet,

Full of hope and love,

My eyes without sight,

My soul without torment,

Going westward on my journey

By the light of my heart,

To the end of my road.

With my back to the wall

Is Mise Raifteirí an file,

For "Tuesday Poem" based in New Zealand. 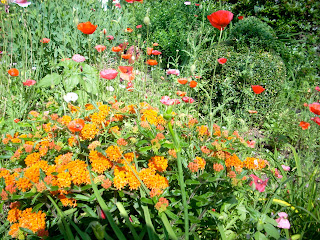 Smilla Dankert from Cologne, whose blog I follow, asked how I was. In the same message she wrote:
Your blog changed a bit; at the time you were in Miami you always wrote these little stroll-reports
and so it was more easy to get to know your all-day-mood (sort of)
Now it's not that easy anymore...
I thought, Back north in Fast Land, it's not so easy for me to know my moods. Photos pile up, details scatter, work increases. At the southern tip of Miami Beach I was three blocks from the ocean and got there almost every day. I could see the horizon.
Spring up north came all at once this year after flooding rains. Epiphany spring. Boom! Poems came in electric spurts. Electric for me. Who knows which ones will be left standing.
It's been lovely to stroll again: to artist Mimi K.'s garden--poppies and butterfly plants in bloom; it was lively to find a cast-off undergarment that heavy rain washed to the sewer grate. 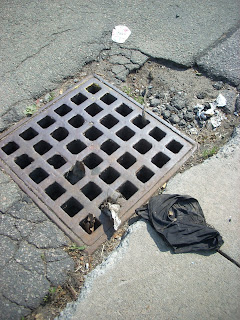 This bike was meticulously organized to carry a light cargo of materials for recycling: plastic bags sorted into types. There was a paper bag neatly filled with plastic bottles. There were pairs of protective gloves clipped to the carrier. At first I foolishly thought the bike belonged to someone dedicated to green, recycling, etc. I shot a few photos and as I walked away I saw a man cross the main street and head for the bike. "Is it yours?" I asked him, and he said yes. When I told him I had taken photos of the bike--"so beautifully organized"--he said, "I'm trying to earn a few dollars." He had come from the return-for-deposit machines at the supermarket across the street. He works on his own at collecting discarded, tossed, for-deposit bottles people don't bother to redeem for money. He redeems. We shook hands. He gave me permission to take his picture. His name is John. Will I see him again? I was so happy he didn't say something like, 'You're a nice little lady.' Lady I'm not. 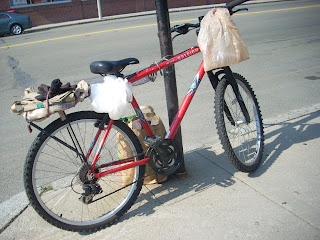 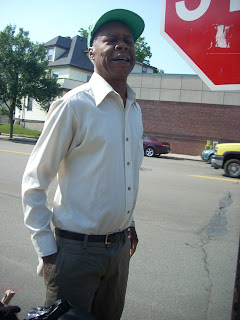 At the pond the faucet gleamed. The water was clean. I wish I had the skill and time to rebuild that rotted-out piece of wood so that it still bore marks of age and the grain. Or find a piece of salvage I could cut to fit that round opening. Marked salvage.
Stroll rhythm--now too as I write and quiet down. (Bummel is a German word for stroll--just found it on Google. Does the word Bummel have anything to do with the English "bumming around"? I hope so!) 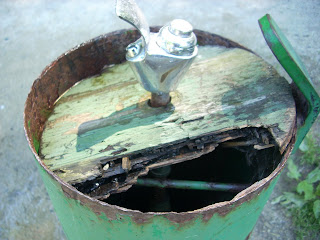 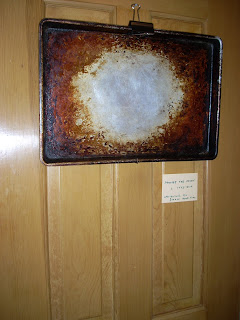 In my small way I like to transform things--soak labels off jars; clear the glass; remove the brand; shift my angle of vision and see the moon on this grease-blackened-and-browned cookie sheet. 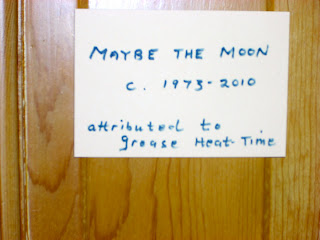 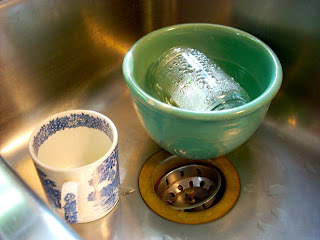 I say this as if I am always the agent ruling my eyes to shift. In fact, often the shift happens by itself. By chance. It's the fashion to call this "creative." But I just go with it. The shift catches me. Sometimes the shift is soft, sometimes violent as when birds shoot up like geysers.
As for soaking labels off jars, that's deliberate. Yet if I make the water hot enough and wait long enough, I don't have to claw or scrape much. And sometimes glue melts and the labels just float off.
This morning when I woke at 3 A.M., thinking it was dawn, I found my notebook and wrote--a dawn of sorts. I got back to sleep. If I hadn't my eyeballs by now would feel as though they were popping out of my head. I'd be wasted. Tell me: how did you sleep last night?
Posted by Mim at 6:41 AM 13 comments: 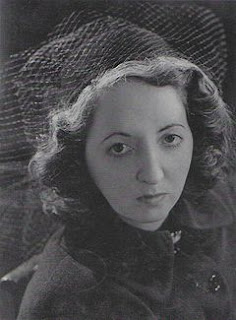 Olivia Manning, 1908-1980
It's an extraordinary novel, School for Love, so much so that I want to keep repeating the title. Thanks to New York Review of Books Classics, Manning's novel, first published in 1951, is finally out in America.
Set in Jerusalem in 1975, School for Love tells the story of orphaned Felix Latimer. On his first night in the freezing house of the monstrous Miss Bohun, described by Jane Smiley in the introduction as, "a marvel, even a paradigm, of hypocrisy," he lies in bed grieving, completely alone until the cat Faro joins him. (Manning knew cats and wrote about them in the nonfiction Extraordinary Cats.)
The School of Love is worth reading if only for Manning's descriptions of Faro and her powers:
He [Felix] stared into nothingness, thinking he would never sleep, never feel warm again. At last Faro jumped on to his bed and he felt her paws, soft and heavy, move with cautious certainty up to his face; her whiskers touched his cheek as she sniffed to be sure of him, then, like an arrow-tip of ice, her nose pointed between the sheets. He raised the covers for her. Slipping like silk into his arms, she curled warm against his body and lay with her chin on his shoulder, purring contentment. He wrapped his arms round her. Comforted, kissing her between the ears, he whispered: 'I love you.' He pressed his face into her fur and said: 'Faro, darling little Faro . . . ' but in a moment, when he meant only to say 'Faro', he found he was saying: 'Mother' and all the tears he had kept back that day streamed down his face until he slept, exhausted.
Manning commands a number of tones, among them, ironic notes, and tender notes. Tonight I lean toward the tender ones. Just the word "Faro"--isn't that soft?
Posted by Mim at 2:53 PM 9 comments: 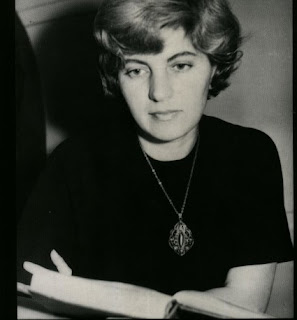 Blaga Dimitrova
Deserts
I was born for love--
to give and to receive it.
Yet my life has passed
almost without loving.
So I've learned forgiving:
even the deserts
I have crossed
I feel no scorn for.
I just ask them
with astonished eyes:
What gardens were you born for?
(Translated from the Bulgarian by Heather McHugh)
Tuesday Poem, a community of poets, is based in New Zealand. 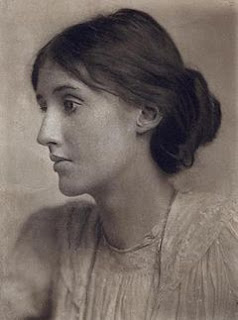 Virginia Woolf
For the next two weeks I'll be with myself. If I'm lucky new poems will come. In the intervals there will be walks to the various nearby ponds and time to read: dip in, float, dive; time to hear the rhapsodists sing. (Please scroll down for more on "rhapsody.") The ocean, which we think of, live near, live from, is in all of these selections.
From Woolf's To the Lighthouse:
So off they strolled down the garden in the usual direction, past the tennis lawn, past the pampas grass, to that break in the thick hedge, guarded by red hot pokers like brasiers of clear burning coal, between which the blue waters of the bay looked bluer than ever.
They came there regularly every evening drawn by some need. It was as if the water floated off and set sailing thoughts which had grown stagnant on dry land, and gave to their bodies even some sort of physical relief. First, the pulse of colour flooded the bay with blue, and the heart expanded with it and the body swam, only the next instant to be checked and chilled by the prickly blackness on the ruffled waves. Then, up behind the great black rock, almost every evening spurted irregularly, so that one had to watch for it and it was a delight when it came, a fountain of white water; and then while one waited for that, one watched, on the pale semicircular beach, wave after wave shedding again and again smoothly, a film of mother of pearl.

Hart Crane
From Crane's "Voyages II":
And onward, as bells off San Salvador
Salute the crocus lustres of the stars,
In these poinsettia meadows of her tides,--
Adagios of islands, O my Prodigal,
Complete the dark confessions her veins spell. 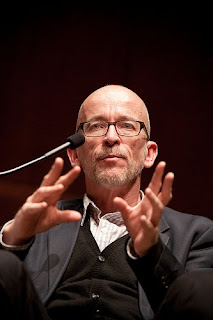 Mark Doty
From Doty's "Almost Blue" (Apologies: line breaks are not accurate because of formatting problems.)--
If Hart Crane played trumpet he'd sound like you, your horn's dark city
miraculous and broken over and over, scale-shimmered, every harbor-
flung hour
and salt-span of cabled longing, every waterfront, the night-lovers'
rendezvous.