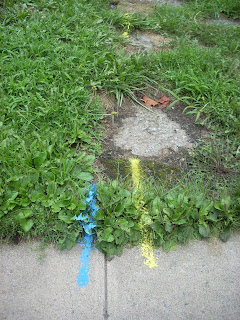 Some years ago at Boston University there was an undergraduate literary magazine called Patterns, a name that fit the age of New Criticism in which we scrutinized the text for forms. Color, metaphor, design. Seldom did we look beyond the text. New Criticism was a convenient way to instruct undergraduates who, it was believed, were not ready for research. I'm still interested in patterns. In a small town in upstate New York I liked the parallel lines of paint indicating utility lines, though the sight of paint on top of grass was jarring. Yet safe digging requires these marks. Cut a gas line and risk an explosion. Cut a water pipe and risk a flood.
At the local office of the Division of Veteran Affairs on the main Street I read these notices as history, a pattern of history. 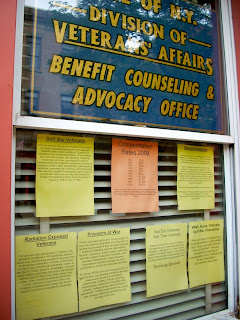 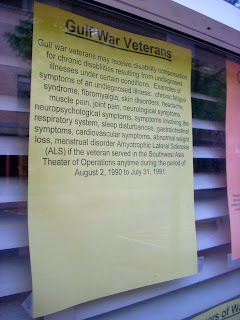 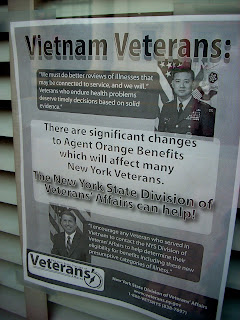 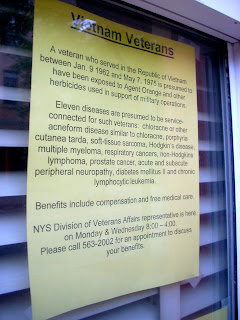 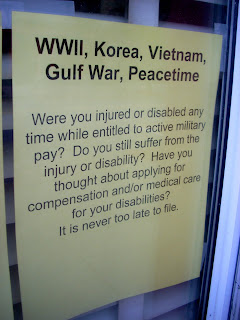 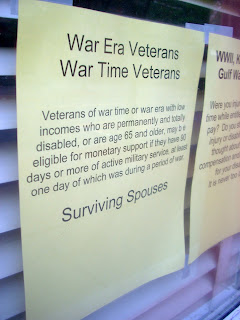 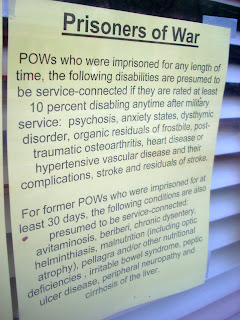 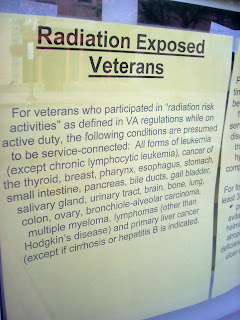 Finally, a credit to the Obama administration, Agent Orange benefits have been changed for the better. In time, there will be a notice for veterans of the War in Afghanistan.
Posted by Mim at 2:55 PM 3 comments: 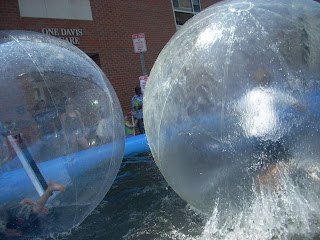 The three of us--Ms. B, Mr. H. and I--were uneasy when, walking through Davis Square on our way to a friend's book party, we saw children thrashing about inside these huge plastic bubbles at the Art Beat Festival, which we ignored: there wasn't much art. The temperature was in the nineties; the sun cooked the plastic; sunlight flared off the plastic. The bubbles turned and collided.
We spoke up about the child who appeared to be exhausted--a small boy with fair hair--and were told the rule: children under two and under are not allowed. This boy was older than two but small. Finally his father and the attendant released him. 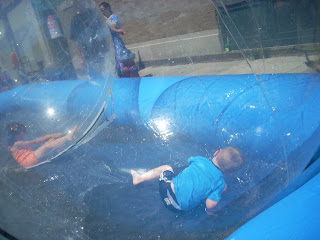 The older children could take it--the falls, the bumps. 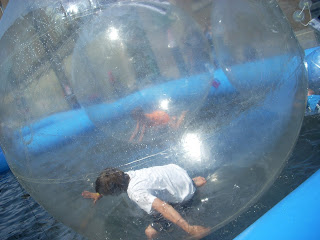 There were air holes, small air holes.
As the bubble turned and the child flopped, thrashed, slipped and slid, the bubble took a little water, making the concave surface even more slippery.
Have you seen this amusement, which was not amusing to me?
Posted by Mim at 11:54 AM 11 comments: 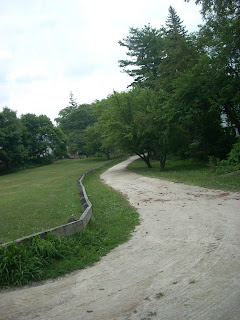 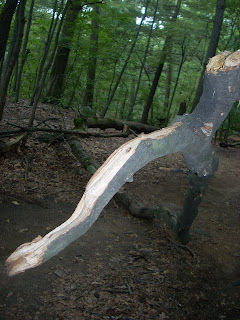 Democracy is not exclusive. In theory: power to the people; all the people. I am a democrat. I vote; I belong to no exclusive clubs and shop at no exclusive stores. I frequent public libraries and belong to a union. I am a graduate of a public grammar school and high school.
Yet democrat though I am, I'm aware of my many acts of exclusion. Take these two pictures. Imagine how much I have left out.
Some of my colleagues at work would say, "My door is always open." Not mine, I would think. "Please knock," said the sign on my office door. (I was lucky to have an office with a door. I'd freak in a cubicle.)
Oh, the luxury of privacy! I've heard about the punishing lack of privacy in prisons, except when there's too much in solitary.
Though in the larger sense, I'm one person among many, crowds, conventions, huge gatherings turn me off. You won't see me at a fireworks extravaganza. Let me have a table for one or two people or a larger round table where a congenial group may talk and eat something delicious. Do you have a favorite dish?
Posted by Mim at 12:31 PM 13 comments: 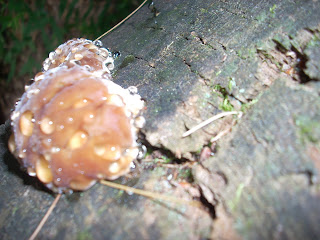 The fungi living on the oak tree exude liquid. A clear ooze. 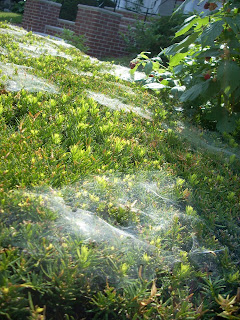 A creature, whose name I don't know, a spinner but perhaps not a spider, has extruded these webs along the top of the clipped yew hedge, pushed out fine threads through tiny openings. The webs mist the severe line.
I also think of the way breath clouds a window: a category different from exudations and extrusions. But back to the Realm of Ooze and Extrusion, what are you thinking of? Tell me, please.
Posted by Mim at 8:13 AM 12 comments: 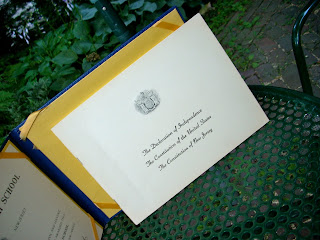 This Mac computer, which already feels too hot under my wrists, had been turned off since Friday.
Our Fourth of July was quiet, J's and mine. In the early morning while the house was still cool he read the Declaration of Independence out loud as I walked up and down the living room, my bare feet on the carpet.
He read from the booklet containing The Declaration of Independence, The Constitution of the United States, and The Constitution of New Jersey, which I had received at graduation from Junior High School along with the engraved "Certificate of Promotion to the Senior High School." The Board of Education gave us--in lavish blue and gold with ribbons--this gift to officially welcome us to the Republic. Not that I thought in those terms on graduation day. Yet many of my teachers had already schooled us by example and by drawing us out with questions, in Civics class, and in the regular classroom. They raised questions; we answered; sometimes we fumbled; we thought. Most of our teachers had come down from New England, unmarried women--that was the rule when they were hired--to work in New Jersey. Hazel Putnam, descendent of the Revolutionary War General Israel Putnam had taught me about the Republic.
I had been nervous about letting J. touch this gold-stamped memento and artifact of another time and a past life and I made him promise not to "slop it up." I administered the oath--"I promise, I swear . . . "--and he took it. You see, earlier he had tried to read from the print facsimile in the New York Times and found it unreadable even with a magnifying glass, so I had volunteered my treasure and then took the risk. It was worth it, and the documents are still in good shape.
We both loved the inditement section in which the crimes of George III, King of England, are rolled out one after another, gathering force, in 27 succinct paragraphs beginning mostly with "He." He the king had done this; he had done that. He had gone too far. His acts, his crimes, had piled up. Enough!
Our founders indited a king.
"A prince whose character is thus marked by every act which may define a tyrant, is unfit to be the ruler of a free people."
The passage in which the founders' recounted their unsuccessful appeals to their "British brethren" lit up for me and J:
We have reminded them of the circumstances of our emigration and settlement here. We have appealed to their native justice and magnanimity, and we have conjured them, by the ties of our common kindred, to disavow these usurpation, which would inevitable interrupt our connections and correspondence. They, too, have been deaf to the voice of justice and consanguinity.
Consanguinity: with blood, with common blood. Blood brothers: English to English.
Don't we all have blood in common, aren't we all commoners? Blood when it shows in my veins through my pink skin is blue, which does not make me and others like me superior blue bloods as distinguished from darker-skinned people who do not appear blue-veined. All blood is red; when it dries it is purplish. Royal purple, common red: all of us. Red, white, and blue, etc., etc. Bring on the colors! But flag raising is not to my taste. 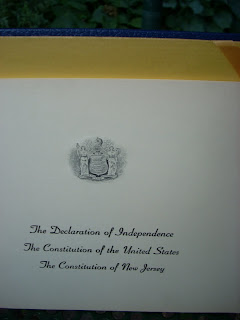