Related life forms from the Eukarya domain to which humans belong
Love, death, flora, fauna, self, mother, father, child, sister, brother, pleasure, etc., etc., We all have our themes and interests. We make distinctions. Certain things interest us, other do not. 'I am not interested in death, not even my own,' Colette famously said.
Editors also have preferences. Some have mission statements. The 21st century has not so far been a time for anything as grand as a manifesto, but there are mission statements and explicitly stated editorial policies about content. One from the American Poetry Journal states, "not interested in: poems about family members; poems about the poet; the poem; or writing a poem; or poems with an overabundant 'I.'" (Italics theirs.) Their mission does not interest me. I love, for instance, the big I-am of Whitman's "Song of Myself," and the first person voice of Bishop's "In the Waiting Room."
The idea of family--all kinds of families--fascinates me. According to scientist E.O. Wilson, writing in The Future of Life, biologists now divide life into three domains "on the basis of DNA sequences and cell structure." Humans belong to the Eukarya, a vast domain, which I like to think of as family. The Eukarya, includes "the single-celled protists or 'protozoans,' the fungi, and all of the animals." Plants, too.
Dear Readers, dear Eukarians: what fascinates you?
Posted by Mim at 7:00 AM 7 comments:

Friends in the Surf 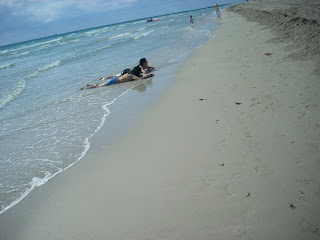 There were few people on the beach this morning and nothing to block my far off view of two young women lying in the surf. The caution flags flew from the lifeguard station, and there were Portuguese man-of-wars all along the beach, but these friends had found a safe place. As I reached them, I heard them talking compatibly. They lay on their stomachs; the ocean washed over them. The water was cold, the sun warm. I could hear their light voices for a minute or two after I had passed them, an easy back and forth in the dissolving foam, the waves played out. I couldn't hear much of what they were saying. It didn't matter. The rhythm and sound of friendship stayed with me as I walked north.
Posted by Mim at 3:06 PM 13 comments: