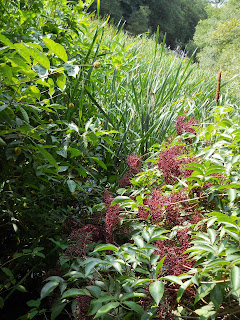 Though loitering with intent, not to do mischief, while reading you, off and on, in the nowhere of the blogosphere, I haven't blogged much. Summer, storms--of various kinds--and physical problems have cut short my time at the computer, but now there are fresh pictures, and a little about Robert Walser's Microscripts.

Above: black elderberry--I think--at the pond, tiny figures in the distance, just the right proportion. 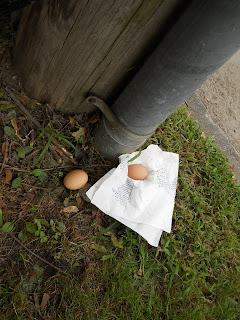 Hard-boiled? The eggs are so carefully placed. Discarded from someone's meal? 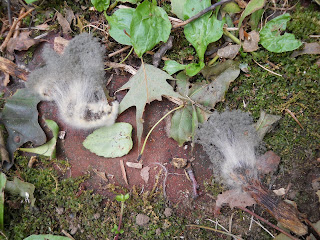 Delicate chance mold, mushrooms breaking down all right and finding another form. Words that might apply to Robert Walser's life.

Walser sometimes shrunk his writing to tiny letters and marks, which for a time was believed to be code. He wrote "Swine," an essay now included in Microscripts, published by New Directions, on a slip of paper measuring approximately 3 inches by 2 1/2 inches. Walser's tone disarms with seeming inconsequence. His tone charms me:

A person can be swinish in matters of love and might even succeed in justifying himself to a certain extent. In my opinion, various possibilities would appear to exist with regard to swinishness, etc. Someone might happen to look like a person who appears to be a swine, and all the while he is at bottom perhaps fairly upstanding. One can say with a rather large degree of certainty that men seem to possess a greater predisposition and talent for swinishness than women, who of course are now and then capable of achieving excellence in this regard.

Walser's charm is sly: "achieving excellence " in swinishness. I'll cop to that.

What are you up to? Let me know, please.