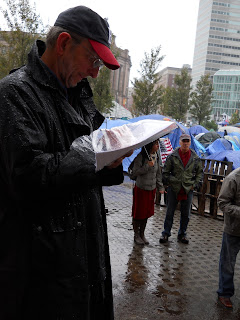 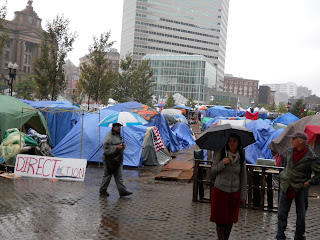 Rain picks up. People begin to gather for the reading.
It was my turn. I read "Buying Flowers," a poem from the T'ang Dynasty, which speaks for the poor man in the "emperor's city." As I read this 8th century poem, I felt part of a cycle of voices. Rain spotted the page.

Late spring in this emperor’s city,

horses and carts clattering past:

it’s peony season on the avenues

and the people stream out to buy.

They won’t be this cheap for long.

At these prices, anyone can buy.

they rig canopies to shelter them

and bamboo screens to shield them,

sprinkle them, stand them in mud,

keeping their color rich and fresh.

Families come back day after day:

Happening by the flower markets,

an old man from a farm somewhere

gazes down and sighs to himself,

a sight no one here could fathom:

a single clutch of bottomless color

Translated from the Chinese by David Hinton 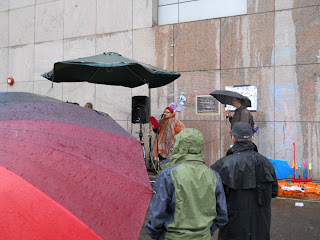 J. took the photo. Po Chu-i's poem set in spring, in the imperial city, fits the fall day in Boston. That red umbrella is a rain-spotted peony, and the folder in my hand a big petal. Let's stop there before metaphors taken too far become absurd.

It was marvelous to see this still life in a private apartment near Harvard Square. Someone arranged it for the passerby, kept the shade up. I wonder what happens at night. I wonder whether the still life is lit then. 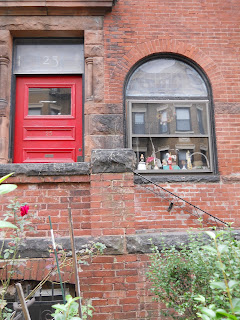 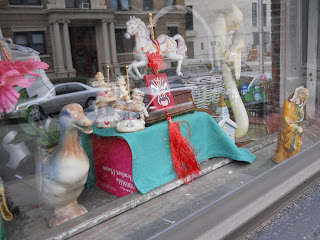 Duck, horse, church, red tassel, sage, shoebox, carrousel riders but no carrousel. What else is there? What can you see? Not the absent person. Do you make altar-like arrangements like this one?
On another day, this time at the pond: snarled, useless fishing line and fly caught the light. 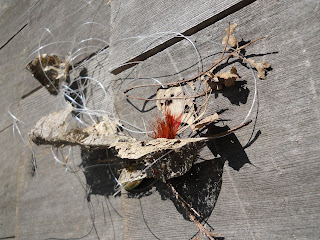 Fretted leaves make shadows.
October days: I want to be out, in them.
Posted by Mim at 1:25 PM 9 comments: