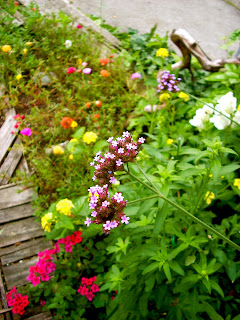 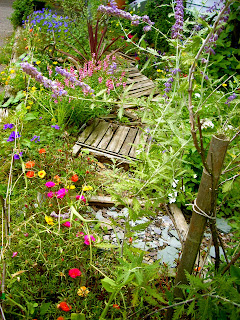 My neighbor Rick could have planted large flowers in his front garden--mallows, peonies--but he put in small plants, quilting in tightly under the yellow-flowered trumpet vine twining up to the roof. The garden is in its glory; the quilt has burst its stitches. Plants burgeon just before frost, which cuts them down when they are at their fullest. Emily Dickinson called frost "the blonde assassin." At Thanksgiving we should celebrate the wild glut as we fork up our food, and mourn because the the hot days are over.
After I saw Rick's garden I moused around my neighborhood, looking for small things, and found this clematis virginiana topping Gretchen and Fred's iron fence. There's an infinite number of tiny white flowers. I like the frothing lace better than the frisbee-sized blossoms of clematis hybrids. 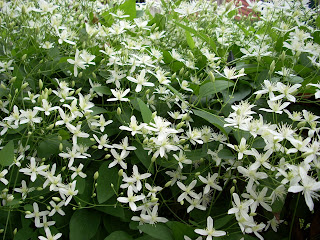 Someone's built a play farmstand. Where are the children? Inside with their computers? 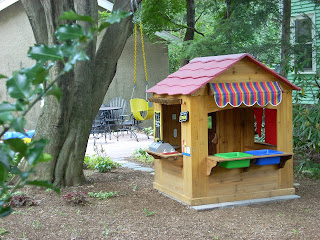 When I was small I loved "The Little People" comic strip that would appear in the Sunday paper. There were so many of them crammed into the comic-strip 'windows.' And they were so busy, so cunning. Here's a gang of them fishing from a teapot. 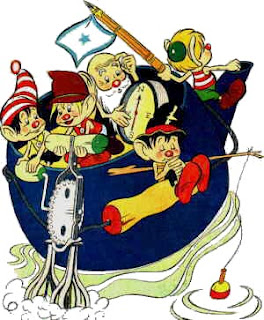 PS: Before "The Little People" I was entranced by "The Teenie Weenies." 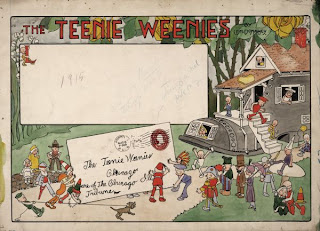 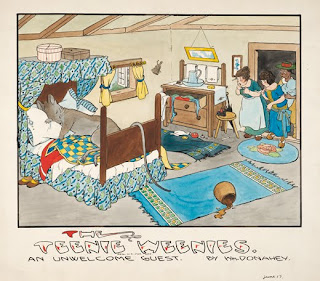 There used to be a doll shop in Boston, on Charles Street. It was well known for its miniature doll-house pies, the artificial fruit fitted into crimped bottle tops.
Posted by Mim at 8:17 AM