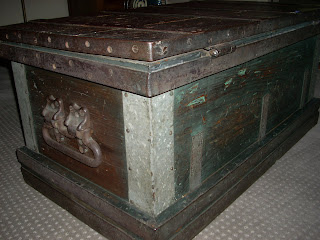 It was time to replace the soiled rug that's been down for twenty years in a room we use every day. John and I finally agreed the rug had to go. He also wanted to get rid of the chest that served as our coffee table. I wasn't so sure. We had had the chest since 1965. John found it in a building about to be demolished in the South End of Boston, and carried it home to our small apartment on Harwich Street--the building's long gone--with the help of a friend. The chest is very heavy and may have been used for tools. We once saw a similar one underground in the subway in Boston.
Our marriage and our possession of the chest are almost contemporaneous, but I was surprised at how easily I adjusted to letting the chest go and wondered what else I could cast off.
We're thinking of replacing the chest with the Noguchi coffee table first produced in 1948. The glass-top table looks light, though it probably is as heavy as the chest. There are no sharp corners, no place to store things. The wing-shaped glass top seems to float. Maybe I'll make it a symbol of the next period of our marriage. Maybe not. I don't want us to be too light or smooth or transparent. No chance of that. Even after we had made the decision to buy a new rug, we quarreled about how really dirty it was. John ran his foot back and forth across the rug, raising the nap, making the rug darker. "See, it's not dirt," he said. "What are you talking about!" I answered. "You're sure on a short fuse," he said. I had barely raised my voice. 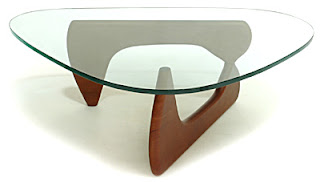