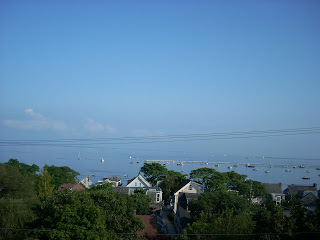 Last night I waited for our friend A. to arrive at our place for drinks before dinner. He was sailing from Wellfleet to Provincetown. I scanned the harbor from our terrace and saw a boat heading to shore. It had three sails and a white hull. I knew A. had recently bought a large boat, and I thought this one might be it. I called him and left a message on his cell phone. If he had answered I would have waved the red bandana I held ready to signal, but I thought, That's a large boat for him to sail single-handedly. What a land-lubber I am! The boat was a three-masted schooner, too large for a crew of one.
A. arrived at six as promised. The trip had taken four hours; by car it takes twenty minutes. We sat on the terrace, while the dropping sun turned the lighthouse pink and the sailboats amber, and drank a Bordeaux, Chateau de Brondeau, 2006--a wonderful wine--under twenty dollars--from University Wine on Massachusetts Ave. in Cambridge. John fished big green olives stuffed with sun-dried tomatoes out of the narrow jar. A. talked about "Julie and Julia," comparing the slow time of the 1950's, when Julia Child and her husband Paul were in France. He could come home for lunch; they could converse; she took eight years to finish "Mastering the Art of French Cooking." They never seemed rushed, unlike the contemporary couple in the film--Julie is always frantic.
We exchanged dreary publishing stories, but nothing could ruin our mood, not the failure of A.'s friend to place her novel, nor our failure to get a table at the Mews. A. led us to The Mayflower where we ate fish and clams. A. asked if we would walk him to the shore and see him off. The three of us went down a dark narrow cut between buildings on Commercial Street and walked to the dinghy. A. turned the boat over, dragged it to the water, came back to say goodnight, touching my shoulder. There was a sliver of a moon. The tide was low; he had to haul the little boat out past a sandbar before it would float. We saw the oars flash. He was on his way. He would sleep in the sailboat anchored off shore, and in the morning sail back to Wellfleet.
Posted by Mim at 2:03 PM