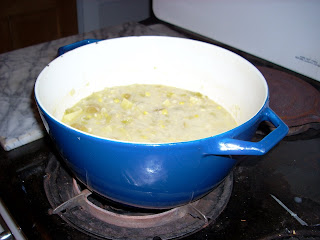 Steve's coming to dinner, and we will eat corn chowder, followed by corn on the cob. I could make corn pone or corn bread or hush puppies, and corn pudding for dessert, but I won't. There are plenty of other themes worthy of obsession that require less work.
I followed poet Rebecca Loudon's recipe for corn chowder, which she has posted on her blog, "Radish King." 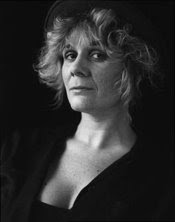 When I read Rebecca on food, I knew her palate was the real thing, sensitive and adventurous as Colette's, and I was right: the chowder is delicious! Here's her recipe:
Veggie (not vegan) Corn Chowder


Dice the celery and the onion.
Wash the sand off your leek, dry it, then slice the white part into thin rings.
Heat a blob of butter and a blob of olive oil in a heavy-bottomed soup pot.
Sauté the veggies until they are clear.

This would be a good time to dice your potatoes to a manageable smallish size. Leave the peelings on unless you get frantic about stuff like that.

Then shuck the corn and cut the kernels off with a very sharp knife. I usually break the corn cobs in half then cut the kernels off in a bowl because they make a mess and go flying everywhere. After you cut off the kernels, scrape the cobs with the back of a knife to get out all the sweet milky corn goodness. Don’t cheat on this part. It’s what makes this chowder so yummy.

Add 1 cup of dry white wine to the veggies and let it reduce by half.
Add the veggie stock and bring the fire up until it boils.
Toss in the potatoes and corn and corny milk stuff.
Lower the fire to a simmer.

Once the potatoes are tender, about 15 minutes, add the cream, a teaspoon of cumin (you just have to trust me on this), a bay leaf if you have one, and a sprig of fresh thyme if you have one of those. Salt and pepper to taste. Turn the fire to low and let the chowder simmer for at least a half hour.

Once you're ready to serve this, drizzle it with a wee bit of very good virgin olive oil and sprinkle it with chopped flat parsley for looks.

Serve with a good crusty piece of bread. I’m making baguettes today because I don’t have time for brioche.