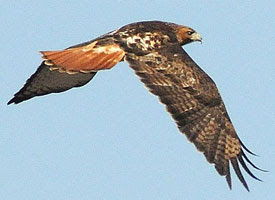 Last night while John and Steve were lapping up corn chowder I entertained them with imitations of the voices that used to bleat, throb, and explode across the courtyard of our apartment house when I was growing up in Passaic. Our neighbors would shout questions: What do you think I'm talking about, what do I mean, what kind of person would do a thing like that? They would shout their own answers, prefaced by, I'll tell you what I mean. Some day you'll have kids of your own and then you'll suffer, they would scream. If they expected remorse, they didn't get it. Their children would shout back, savagely: Drop dead. Or they would weep in breathless shrieks.
In the midst of my routine, which had John and Steve laughing into their soup, I heard someone calling my name, and looked out the window. It was our neighbor; he asked me to come out. He was in the driveway, his wife, and children, and their friend with him. I went out. They were all looking in the same direction. There was a hawk perched on the telephone wires--those spurred claws on the wire. The hawk barely moved. They had seen the hawk eat a bird in the driveway. We kept watching. No one said much, and when we did speak we kept our voices low.
Posted by Mim at 5:32 AM