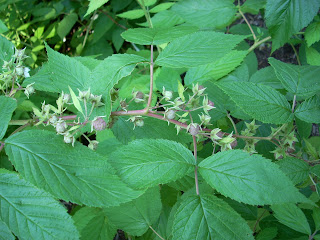 Today the weather is fruit-fly spawning, eye-smarting, sweat-springing hot; everything coated with a hard, sharp, coppery glare. We don't have central air conditioning, but two upstairs rooms have window units. They're on full blast, the doors open so cold air blows into the hall, which would otherwise be a heat funnel. Every other door is closed, the windows too; the blinds are drawn; our dim rooms are cooling down. John is watching "The Sopranos." Tony is having a bad day. He never has a good day. Nothing changes for Tony. That's why I can't watch the program, though I'm not above watching the worst schlock.
I went out of the cool house into the scorching garden. There's a second crop of raspberries. We'll have pints! As soon as it rains, these firm green incipient berries will swell. The black-eyed Susan is standing up to the heat. 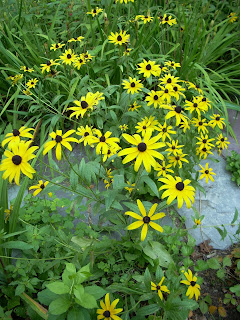 I cut some ferns, immediately soaking the cut ends so fronds wouldn't wilt. They're in the white vase next to other pale cool things, except for the little red sack that's filled with useless money from the pre-Euro years. Later I'll paint with watercolor. I'll fill my dipping jars with ice water.